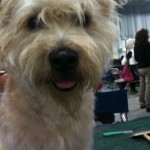 “New York City is one of the most intense cities in the world. We’re literally stuck on an island together. It’s the original Survivor. We’re on this island and we’ve got to figure it out.

In New York, it’s impossible to hate because you are confronted by your fears everyday. Â If I never see a bald man, it’s very easy to hate him. It’s easy to hate in the abstract. But I’m constantly confronted by every different aspect of life in New York City. You can live in a fancy building on one side of the street and look over the projects on the other. There’s a multimillion-dollar building in my neighborhood that is literally wrapped around a gas station. Only in New York could that happen.

There’s a fabulous doggy park on the West Side Highway on the corner of 23rd street. It used to overlook the Hudson and now it looks over Chelsea Piers. And because it’s in Chelsea, you get to see some of the rarest breeds of dogs you’ve even seen. They’re all purebreds. There’s not a mutt in that dog park. I wouldn’t dare take a mutt to that dog park. It’s like the Westminster dog show without the leashes. It’s wild. It’s all these gorgeously groomed dogs who live in fabulous fancy apartments and most of them have two daddies or two mommies. And they (the dogs) go absolutely bonkers for 30 minutes in this dog park. It makes me laugh out loud.

I have a Glen of Imaal Terrier who won her breed at the Westminster dog show. Her name is Curry and she’s an absolute lunatic when I get that leash off. She loves it. When I got Curry, I asked friends about doggy parks. And my friend said there was an amazing one there.

There, Â in the middle of a motor way â€“ in the middle of 12 lanes of traffic – all these rare gorgeous creatures. It was almost like Jurassic park â€“all different breeds all getting along. It’s almost like the UN of the West Side: with all the different countries represented. From the English Terrier, to your Scottish Terrier.Â  To your Irish dogs, to the American bull terrier. Your Afghans are in there. Your French poodles are in there being rude. There are Australian dogs. It’s marvelous. And the only thing we have in common is our love of dogs.

I’ve met everyone from every different walk of life in the doggy park. I’ve met business executives who probably live in $20 million penthouses overlooking the Hudson and people on more modest income who probably live in a walk up on 18th street. It’s every different type of human being with this shared passion. There’s no place else where these people would get together. As diverse as the dogs are the people are more diverse. And at the end of the day, we all have to get down on our knees with the newspaper and scoop the poop. It makes everyone equal. There’s a democracy. it doesn’t matter if you’re in your Gap jeans like me or Gucci suit, we’re all pooper scoopers.”